Allright, this is one of those posts about how the romance of sailing dies the moment you buy an actual boat. 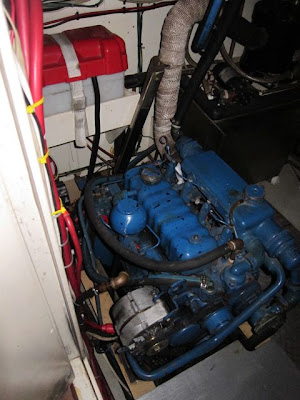 This is our engine.  There are two things to know about it.  First, it's an English engine (a Perkins 4108, to be precise).  Because it is English, it leaks oil.  All Perkins 4108s leak oil.  So do Triumph motorcycle engines.  As near as I can tell, English engines just leak oil.  (My friend Reinhard can correct me if I am wrong.)

Lately the leak has gotten much worse - nearly a liter of oil every 12 hours.  I had a well-recommended mechanic in yesterday to take a look at replacing the seals.  And, bad news - to replace the rear seals, you have to take the damn engine off its mounts and shift it forward for access.  Which means the mechanic figured it at a three-day job.  Which, with the injector pump rebuild that we also need, puts us about four thousand dollars out of pocket.

The second salient fact is that this engine is much smaller than is typical for a boat our size.  Perkins very optimistically calls this a 50 HP engine.  General agreement has it closer to 35.  We displace 18 metric tons, mebbe 19 when we're heavily loaded.

So, we knew the engine was undersized when we bought the boat, and we always figured we might end up putting in a new engine ("repowering") if we were going to go to Patagonia or somewhere silly like that.

Repowering was always a hypothetical, "maybe someday" sort of thing.  But the work our current engine needs is suddenly adding up to a quarter of the price of a repower.  It clearly makes no sense to put so much money into our current engine if we're just going to get rid of it in a couple years.

But, lord have mercy, all this sailing the world stuff is really just an extended lark.  We're trying to keep things fun, and dropping $20k, in Australian dollars no less, just doesn't sound like fun.