One of those classic moments of parenthood last night.  Elias has been fighting a night-time cough for nearly a week, and last night it worsened - he was wheezing a lot, and working hard to breathe, enough that the little triangle of skin just where his trachea disappears into his chest was pulling in sharply with each breath.

We got him out of bed around midnight, when it seemed that there was no space between the coughs for him to breathe.  He woke up, and was calm, but his breathing was still labored.  So, the $64 dollar question - brave the Royal Hobart Hospital emergency room at midnight on a Friday, or put him back to bed and reassess things in the morning?

I drove him to the hospital.  He was calm and chatty, and after we parked the car downtown I thought about just coming home again - he was so clearly not a child in distress, and seemed the picture of a non-necessary ER visit.

But, the chipper story he was telling about the carryings-on at Albuera Street Primary was coming out in this odd rhythm, as he had to pause every three words to catch his breath.  Ah well, we're here, might as well carry through, I thought.  I'm not a doctor, but breathing difficulty seems to be something to pay attention to. 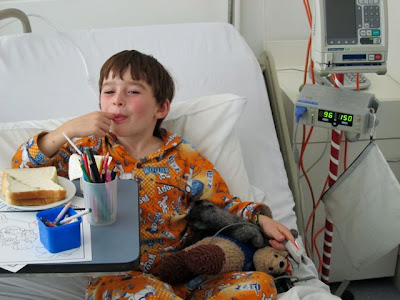 The triage nurse read his oxygen saturation at 88-89%, and that's all it took - we were into the rapid treatment stream, right ahead of the token guy with neck tattoos who had been brought in by the police.

So we spent the night in the ER, and boy was he happy about it.  He got to watch two Pixar movies, back to back, and ate a ham sandwich at two in the morning.  From their reactions, I gather that the staff in the pediatric emergency department aren't used to their patients saying, "I'm having the greatest time!" at three in the morning.

But in spite of his good cheer, his oxygen levels didn't come up, and he had to stay on supplemental oxygen.  No big drama - maybe a bit of pneumonia - but they admitted him to the hospital, and just now we're waiting to see if he'll spend a second night there.

Elias is a public patient, meaning that we do not carry private health insurance while we're in Australia, and his care is being provided by Medicare, the single-payer, socialized-medicine health plan that we have here in Oz.


There's been a lot of grim news about the state of public hospital care in Tasmania lately.  As far as I can tell, the problem stems from the fact that the public hospitals are paid for by the state, not federal, budget.  Tasmania is the smallest state, and likely has the weakest economy of any Australian state recently, and as a result the budget for public hospitals has really fallen.

But I was incredibly impressed by the care that he has received.  It's such a huge undertaking for a government to strive to provide comprehensive health care, free, to any citizen who requires it.  The problems of balancing resources against need are endless when universal care is the goal.  But the public hospital has been everything that we could have asked for in this instance.

And finally, people are people everywhere, and I'm sure that we would have found helpful, caring staff if we'd shown up at a US hospital in the wee hours.  But there is something uniquely comforting about the oh-how-ya-goin-tough-luck-you'll-be-right-soon-mate attitude that Australian doctors and nurses show to a sick five-year-old in the middle of the night.
Posted by Mike